Mermaid of Warsaw - symbol of the city

Warsaw – the capital of Poland, the largest city and an economic, political, and cultural centre; the seat of the highest governing bodies. Warsaw is different: survived the destruction during World War II. There is restored Gothic, communist concrete as well as modern glass and steel. As result it is a fascinating collection of neighborhoods and landmarks. Excellent museums interpret its complex story, from the joys of Chopin’s music to the tragedy of the Jewish ghetto. Now this amazing city is full of contrasts and surprises. It will excite and inspire you.
Krakow – Poland’s former royal capital is one of the most attractive spots on the tourist map of Europe. Since 1978 Krakow has been on the UNESCO World Heritage list and as such, it “belongs to all the peoples of the world”. The city, which lies on the banks of the Vistula River, is famous for its priceless historical monuments of culture and art. This is a place where legends, history and modernity intertwine. A visit of Krakow is a meeting with one of the most glorious epochs in Polish history.

Upon arrival in Warsaw Airport, meet with your driver and transfer to your hotel; Check-in

Breakfast at the hotel

Meet with your guide for a full day tour (+ driver). Classic tour of Warsaw, including the Royal Route with its famous buildings, statues and churches and the Old Town area with the Royal Castle; St John’s Cathedral, the Old Town Market Square, the Barbican and the Monument of Warsaw’s Uprising…

Then drive to Lazienki Complex & visit the Lazienki Park as well as the Royal Palace on the Isle, a former Royal Residence which is a museum today where 140 pieces of artwork from the King’s collection are displayed in the Palace and are exhibited in line with eighteenth-century principles. In the area of complex there is also one of the last 18th century court theatres in Europe in Old Orangery, famous Chopin’s monument and Belvedere Palace.

Return to Warsaw city centre visit Palace of Culture and Science – the highest building in Poland, built between 1952-1955, as a “gift of the Soviet people to the Polish nation”, offered by Joseph Stalin himself. The big attraction is a large terrace on the 30th floor (entrance) with a beautiful panoramic view.

…Pay respect to the lives lost…

Discover the history and the terror of Treblinka, the second largest and the cruellest Nazi extermination camp (Ca. 125 km/ 2 h one way).

Treblinka Museum of Struggle and Martyrdom commemorates the cruel events from World War II. Two camps were established in Treblinka by the Nazis. Treblinka I, was a penal labor camp for Poles and Jews where approximately 20,000 people were imprisoned, at least half of them died during slave work or mistreatment.

Nearby Treblinka II Extermination Camp operated from 1942. Approximately 310,000 Jews were transported in freight trains from the Warsaw Ghetto to Treblinka during the deportation period in 1942. Around 870,000 people were killed between 1942 and 1943, most of them Jews from Poland. Treblinka was solely a desperate death factory. Here there is space for reflection – what many people say is where the power of the place lays.

Back to Warsaw and continue exploring the former Warsaw Ghetto. Although the ghetto has no longer existed for a long time, its history needs to be told… that over 400,000 Jews from Warsaw and the surrounding area were crammed in an area of 4 square kilometers & 100,000 people died here from exhaustion, hunger and disease… The original stones and bricks that survived the horrors of the past are silent but have many stories to tell. The Monument to the Heroes of the Ghetto, the Umschlagplatz Monument and others – shows the Jewish resilience to keep living there against all odds.

…You explore and feel the climate of classical music…

Meet with a local guide + driver. Drive to the Mazovian countryside and visit Żelazowa Wola where the world famous composer Fryderyk Chopin was born. His father worked there as a French teacher. Visit his birthplace – an old manor, which now houses a museum dedicated to composer.

Every Sunday in the summer season you have a chance to take part in Sunday recital performed by Polish or foreign pianists, mainly winners of the Chopin Competition

(optionally – depends on the time – drive to Brochow and visit to an unique example of fortified church where Chopin’s parents got married and where Frederic Chopin was baptized).

Drive back to Warsaw

Breakfast at the hotel, check-out
Morning transfer to the Warsaw railway station for train to Krakow (ca. 300 km, 2,30 h). Krakow –  former royal capital. Transfer to the hotel, check in.
Afternoon half day guided walking tour with an English speaking guide. Visit all major sightseeing attractions: The Old Town with Main Market Square, Cloth Hall, St. Mary’s Church (entrance), University Quarter with Collegium Maius Building, Medieval Fortifications, Dragon of Wawel Castle, Royal Wawel Hill with the Wawel Castle – Poland’s greatest architectural treasure, where the Polish kings were crowned and buried. In 1978 UNESCO placed the Castle on its List of the World’s Cultural and Natural Heritage; entrance to the Wawel Cathedral, Poland’s national sanctuary with 1000-year-old history, was the coronation site of Polish monarchs. It is also the burial ground of most Polish royalty as well as the greatest national heroes, two poets, four saints and countless Krakow bishops.
Overnight at the hotel in Krakow

Breakfast at the hotel
Morning at leisure to explore city on your own. Lunch on your own.
Meet with your driver for an afternoon tour to Wieliczka (ca. 20 km/ 35 min.) Visit the Wieliczka Salt Mine with a local guide, the world-class attraction included in the UNESCO Human Heritage List. The underground tourist route leads through a mysterious labyrinth of galleries and caverns with unique sculptures, all carved in rock salt. Return to Krakow. Dinner on your own.
Overnight at the hotel in Krakow

Breakfast at the hotel
Meet with your driver for a morning tour to Oswiecim, visit the Auschwitz – Birkenau Museum (entrance + local English guide in museum) listed on the UNESCO World Heritage List in 1978; the tour comprises both parts of the former concentration camp – Auschwitz I and Auschwitz II-Birkenau. KL Auschwitz was established by the Nazis in 1940 and was the largest of the German Nazi concentration camps and extermination centres. It has become a symbol of terror, genocide and the Holocaust. Over 1.1 million men, women and children lost their lives here. Today, in the area of approx. 200 hectares you can see preserved ruins of the gas chambers and places filled with human ashes, primitive barracks for prisoners and miles of the camp fence and roads. Return to Krakow.
Overnight at the hotel in Krakow

Breakfast at the hotel; check-out
Departure transfer to Krakow Balice Airport for your return flight

Our rate per program:

from 1 315,00 Euro per person in a shared double/twin room basis on BB

- The given price is valid for two pax (individual rate)
- The price is non-commissionable and apply for reservations booked and payable through LCC Supertour Poland only;
- The rate is estimate, no reservation has been made
- Quotation is based on **** hotels
- Quotation is based on train tickets at 1 class
- The given rate do not include the guide/assistant for the whole tour
- Local guides where obligatory - are included
- !!! The final rate for the offered program requires reconfirmation (when the final itinerary, exact date, hotels, and services will be agreed)
- Due to unforeseen changes in local schedules & events, we reserve the right to change the sequence of sightseeing, events and activities as well as substitute those listed with others of similar quality… Flight details may cause changes in the program 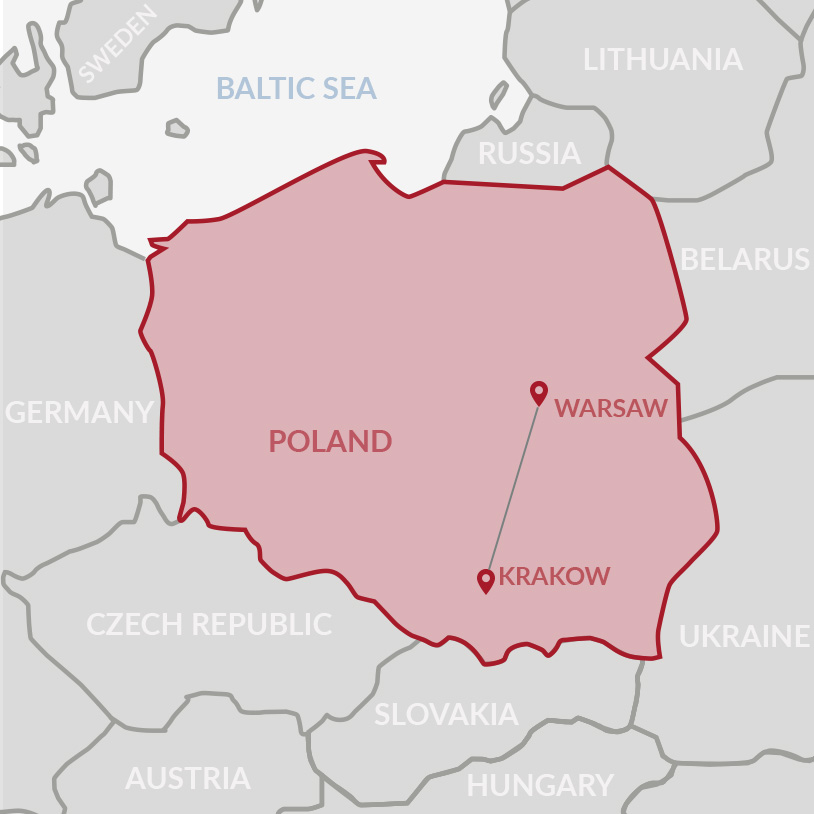